Four Sure Signs Your Phoenix Property Has Carpenter Ants

The best way to know whether or not you have a carpenter ant infestation in your Phoenix property is to see carpenter ants. But many people see carpenter ants and don't know it. Do you know what a carpenter ant looks like? In Phoenix, they're going to be black, or they're going to be dark red and black. They're also going to be larger than other ants. Carpenter ants range in size from ¼ to ½ inch. Other ants are less than ¼ of an inch, and most are ⅛ of an inch. You shouldn't have trouble telling the difference between a tiny little ⅛ of an inch ant from a ½ inch carpenter ant, and keep in mind that if you see ¼ inch carpenter ants, you're likely to see other sizes as well. Carpenter ant workers are polymorphic. Unfortunately, none of what we've said so far could matter for you, or help you determine whether or not you have an infestation. Carpenter ants are nocturnal by nature and typically avoid the light. Often, the only way residents know they have an infestation is by noticing the warning signs. If you're not aware of what these signs are, you're in luck. We have them listed here. 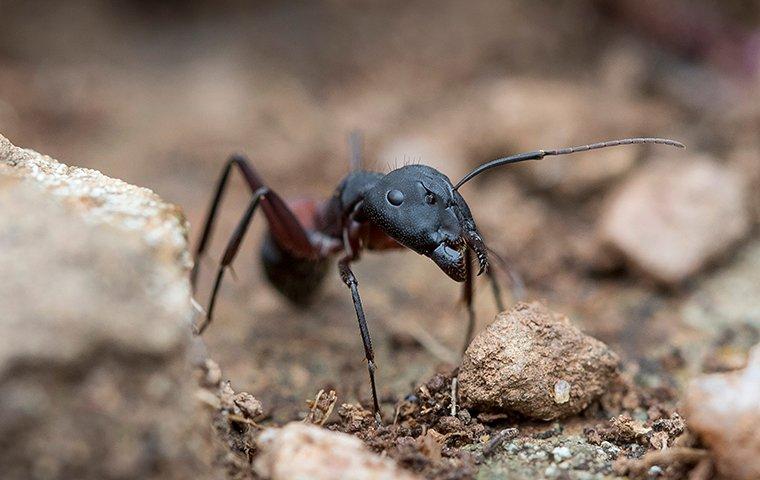 Carpenter ants produce a material called frass, this is mostly made up of tiny wood shavings. You may wonder, "Why don't they call it sawdust." Frass is more than sawdust. It also contains insect parts and feces. If you see frass, you should definitely contact a licensed pest control professional and have your property inspected.

Frass may seem like an easy way to tell that you have a carpenter ant problem, but often it isn't. Frass can be kicked out of carpenter ant tunnels in many places. It can appear under your deck or exterior stairs. It can appear in a crawl space. It can be inside the voids of your walls, ceilings, or floors. If it comes out in a place that is difficult or impossible to inspect, it isn't going to be a very helpful sign.

Carpenter ants will attack wood that has been moistened by water or humidity. A place they often target is the frames around doors and windows. If you begin to notice wood erosion, take a closer look. Carpenter ants could be responsible for the hole. At the very least, you should have rotting wood repaired so that carpenter ants, or some other wood-destroying organism, doesn't take a bite out of your equity.

The damage caused by carpenter ants is often in dark locations because carpenter ants are nocturnal by nature and the workers have a preference for darkness. Dark places also tend to have more moisture and higher humidity, which are also preferable for carpenter ant workers.

When a carpenter ant nest matures, winged ants are created. These are female and male reproductives. A reproductive carpenter ant can be twice as large as a worker. You could see these ants when they swarm. If they appear in your home, be aware that this is a warning sign of a current and severe infestation in your home. Don't think that seeing them on the window is a sign that they came in from outside. Winged carpenter ants aren't like workers— they're attracted to light. That's why they show up on window panes. They're trying to get out to the light. At night time, they may appear on the outside of your windows, trying to get in at the light. If you see them outside, you may not have an infestation in your home. But keep in mind that a carpenter ant swarm isn't going to travel far. It is likely that there is a mature nest in, or near, your yard.

If you live in Phoenix, contact Green Home Pest Control when you see warning signs of carpenter ants. This is a pest control problem that should be addressed as quickly as possible. If left untreated, carpenter ants can do a lot of damage. Reach out to us today for assistance.