Home › Blog › How Dangerous Are Giant Hairy Scorpions In Peoria?

How Dangerous Are Giant Hairy Scorpions In Peoria?

Most people think of spiders when arachnid infestations are mentioned, but Peoria residents have to worry about another dangerous arachnid invading their property as well. Giant hairy scorpions are among the several different scorpions that can be found in Arizona. Their size alone can strike fear into the hearts of homeowners all across the state. They may look intimidating, but looks can be deceiving, and you may be surprised at how little danger they bring to your household. 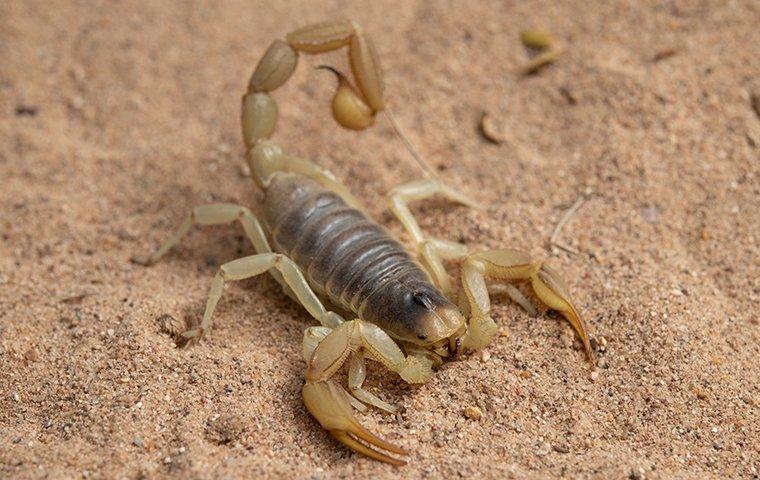 Measuring in at over six inches long, the giant hairy scorpion is the largest species found in the United States. They're light tan to olive green in color, with eight legs and two pincers that are much lighter than their mostly darkened backs and a whip-like tail that ends with a large stinger. They get their common name from their size and the tiny hairs on the underside of their bellies, which are used for detecting movement from potential danger and also prey:

There are lots of interesting facts about giant hairy scorpions and scorpions in general. For one, scorpions glow neon blue-green under ultraviolet light, which is really cool and incredibly useful for pest control companies. Scorpions also give live birth rather than lay eggs, and they carry their young on their backs for several weeks before they venture off on their own. One interesting fact about giant hairy scorpions is that this scorpion is one of the least dangerous species in North America, and in some states, they're even kept as pets!

How To Prevent Giant Hairy Scorpions From Infesting Your Peoria Property

Giant hairy scorpions may not be the most dangerous. However, they can still inflict a venomous sting with a pain level comparable to a bee sting, and an infestation is often indicative of excessive moisture and other underlying pest problems. The best way to keep these pests away from your Peoria property is to remove as many attractive qualities as possible:

What If I Already Have A Giant Hairy Scorpion Infestation On My Peoria Property?

Even though giant hairy scorpions aren't as dangerous as stripe-tailed or bark scorpions, they're still venomous creatures, and they can deal some serious damage. A nest of angry scorpions will still sting when they feel threatened, and multiple stings will require medical attention. Some people are also allergic to scorpion venom, so it's always best to play it safe. If you need a scorpion infestation cleared out of your Peoria home, then Green Home Pest Control has got you covered.

When our pest experts at Green Home Pest Control treat scorpions, we also identify points of entry, moisture issues, and other underlying pest problems that scorpions have been feeding on. We want to make sure you're fully equipped to keep pests away from your home as well, so after we've finished treating your home with our eco-friendly pest control products, we offer tips and tricks to keep your property safe and secure against any potential problems. So please get in contact with us today, and let us help you feel comfortable in your home again.